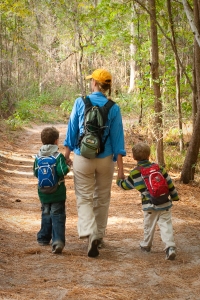 Here’s a Creative Solution: use a CamelBak anytime you want access to water but don’t want to carry a water bottle.  A CamelBak is like a backpack with a water “bladder” (reservoir) and a straw that many people use for hiking and biking.  Instead of carrying a backpack with a water bottle, fill the reservoir with ice, top it off with water, and you’ve got cold water all day:

You can get CamelBaks in all shapes and sizes.  The most popular (and the one my husband and I have) is the Camelbak Mule, which comes with a replacable 100 ounce reservoir.

You can get a larger backpack if you need, but the storage space on the Mule is fantastic.  Moreover, when everyone has their own CamelBak, everyone carries their own stuff.  Which brings me to the kids…

On our first family camping trip, we were astonished by how much the kids loved our CamelBaks, but our packs didn’t fit them (too uncomfortably large), so we were pretty excited to find the Kid-sized version.  The CamelBak Mini Mule fit the kids perfectly. It’s got a kid-sized backpack and a 50 ounce reservoir.  The kids stay more hydrated when they use their CamelBaks, and they can carry their own stuff (snacks, maps, hats, etc.) in the little backpack.  You can find them online at Amazon, LLBean, or in stores like REI.  The Mini-Mule prices range from about $49 – $89, so definitely shop around.  We asked the grandparents to make the Mini-Mule their Christmas gift to the boys, which was a win-win: not a toy, and it lasts for years!  (Note: the Mini-Mule is very rugged, but occasionally, we do need to replace the “bite valve.”)

On our Summer travels this year, we used the Camelbaks when we hiked a couple of trails in the Adirondacks. 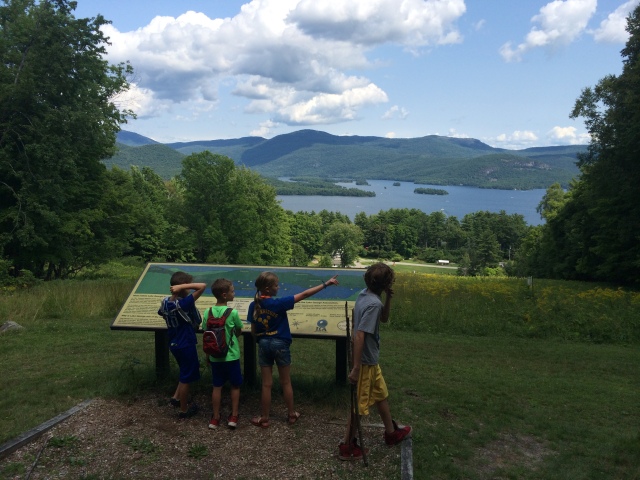 I really wish I had thought to use them when we walked the Freedom Trail in Boston. 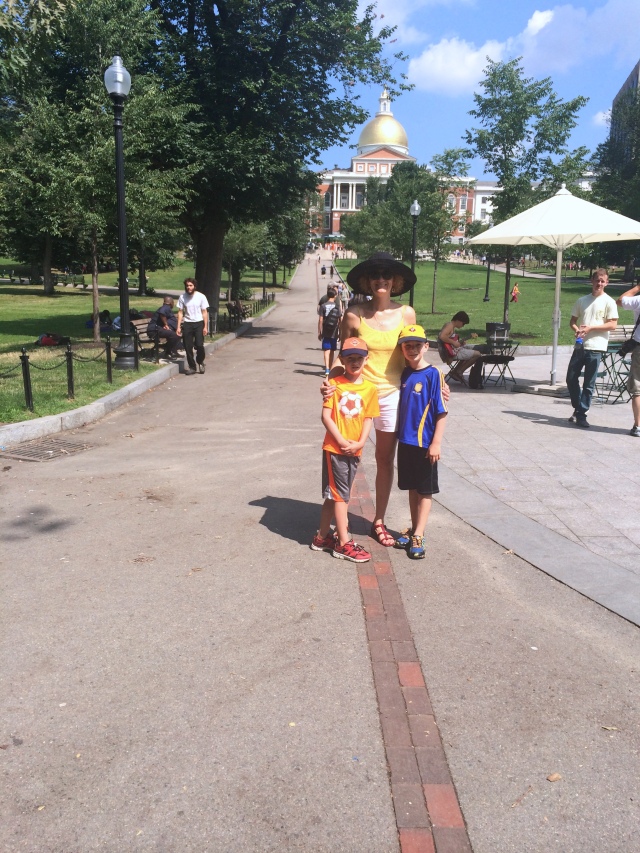 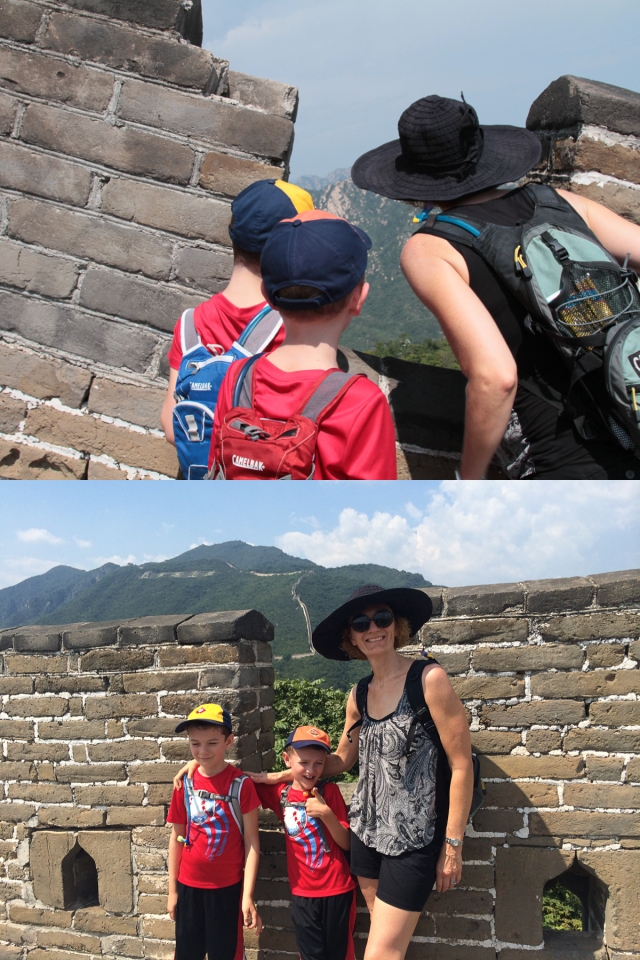 So whether you’re into hiking and biking or just being a tourist, I think CamelBaks are a great Creative Solution.

How do you clean the CamelBaks?

Empty out the water (suck out whatever’s in the straw. too), stuff the inside with paper towels, turn it upside down, and let it dry out for a couple days.

They also make “Cleaning Kits.” But we’ve always just air dried them… I mean if you aren’t responsible about drying them mold/mildew grows and you have to replace the reservoir.

A couple years ago, our family of four transitioned to a gluten free, dairy free diet.  (Why? Click here.)  Every so often someone will ask me how to start that transition.  This Creative Solution is focused on strategies for living gluten and dairy free.

A really good veggie peeler. Not to sound infomercial, but I love my Titan.

These basically live in my refrigerator… I’ll clean the produce and then slice as needed.  I tend not to prepare them in a pretty “party platter style” immediately… the produce stays fresher longer this way.  This way I don’t have to start from square one every time I make a meal or snack… at least something is cleaned and easy to cut.  I call them “platters,” Amazon calls them Baking Dishes… wherever you get them, lids are a must, and I find the 4qt size most useful.

A Food Processor… I’ve had my Cuisinart since the late 90’s and it’s awesome.  Here’s a newer version.

A really good blender.  I love my Vitamix.  But it’s expensive.  But I love it like you’re-not-supposed-to-love-small-appliances-but-I-do.  We used to burn through blenders once every year or two.  I got mine in 2010 and it’s still strong like bull.  And these are super-easy to clean!

Breakfasts are either eggs with meat (bacon, sausage, or veggie packed omelets!) or a protein shake.  After a fair amount of trial and error, we have found a tasty shake combo: Arbonne’s Chocolate Protein Shake mix along with Delicious Greens 8000 Chocolate (which adds a ton of  veggie nutrients to the protein shake).  We make two shakes for my husband and I (one for breakfast, one for a mid-afternoon snack), and one shake for the boys as their “drink” with breakfast.

The boys really like to also have gf waffles or rice Chex on protein shake days.

I pack lunches for everyone in a tiffin filled with fruits and veggies.

Our Lunches in Tiffins

I like using tiffins for a ton of reasons I wrote about in this post, not the least of which is because they are perfect portion sizes; the bottom is a mix of seasonal fruit, the top a variety of cut veggies.  I also like to dip my veggies in guacamole or hummus.  My husband will also pack himself a salad.  I prefer to have some soup.

While some kids would be happy with “lunchmeat rolls,” my boys really like pbj (or pb and honey) sandwiches in their lunch.  After a lot of trial and error, we like Rudi’s frozen gf bread–particularly the cinnamon and raisin.

Another lunch staple for my boys is “ants on a log” (celery, peanut butter, and raisins), so we go through quite a bit of celery each week.  A great tip (credited to Alton Brown): preserve celery by wrapping the stalk in aluminum foil.

Some of the meals in our regular rotation:

For the most part, we avoid “fake” flour… it’s often expensive and rarely tastes as good as you’d like it to be.  However, if you want to make something and really want to keep it gf, try the Cup for Cup flour (which we get at Williams Sonoma).

Even though we’re gf/df, my kids still won’t eat it if it tastes like crap.  I’m also not willing to buy/make a thousand different kinds of fake flours.  So here’s some of the snacks and treats that have passed the taste test AND aren’t crazy difficult to prepare: 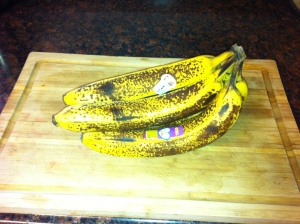 I had seen several candy-dipped banana pops on Pinterest, but  I really try to limit the amount of (unnecessary) sugar my kids eat, so I never made them.  One day, on a playdate at  my friend Amy’s house, she asked if everyone wanted a frozen fruit treat.  She puled out gallon sized ziplock bags of chopped mango and sliced bananas.  All four kids – ages 3 through 6 – LOVED it.  But as the fruit melted, it got a bit sticky and messy.

This Creative Solution came from putting those two ideas together.  I picked up some popsicle sticks, peeled the bananas, cut them in half, inserted a popscicle stick, and froze them. 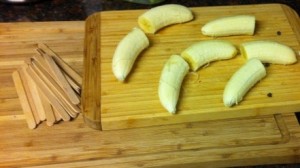 It became the perfect healthy treat on a hot summer afternoon – especially in Houston.  One of my friends’ kids thought it was so delicious he insisted I give his mom the recipe.  She called to say, “It’s just a banana.  Cut in half.  On a stick.  Frozen.  That’s the recipe?”  Yep. 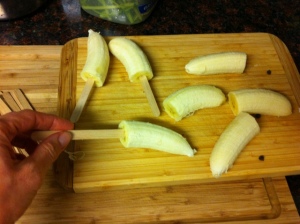 As Halloween came around, Pinterest specifically had a lot of white-candy covered, frozen banana pops made to look like ghosts.  Armed with the knowledge that the kids didn’t need the candy-coating to love the frozen-banana-on-a-stick, I went wild and popped a couple mini-chocolate chips in as the eyes. (Enjoy Life brand is gluten and dairy free.) 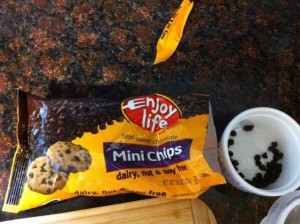 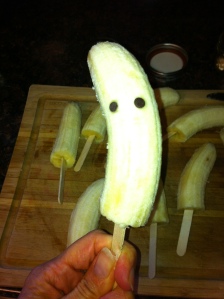 Once you put a couple mini-chocolate chips on the frozen banana, two things happen: (1) the kids go even more crazy for the treat, and (2) there’s really no turning back.  So I came up with a few varieties: 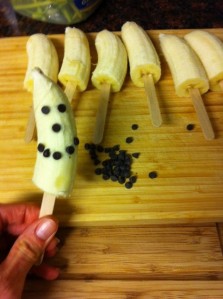 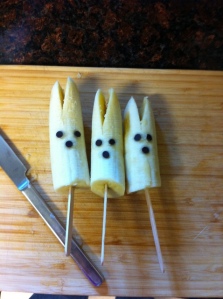 Easter Bunnana pop with two eyes, a nose, and a slit in the top of the banana to make two ears 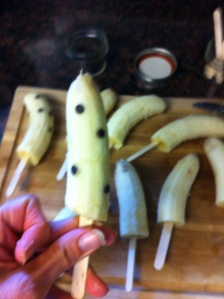 The possibilities are endless.  One day I may even let my boys design own banana pops!

A few of my own guidelines:

Let me know if you can adapt this to find your own Creative Solution.

I wrote a Book! 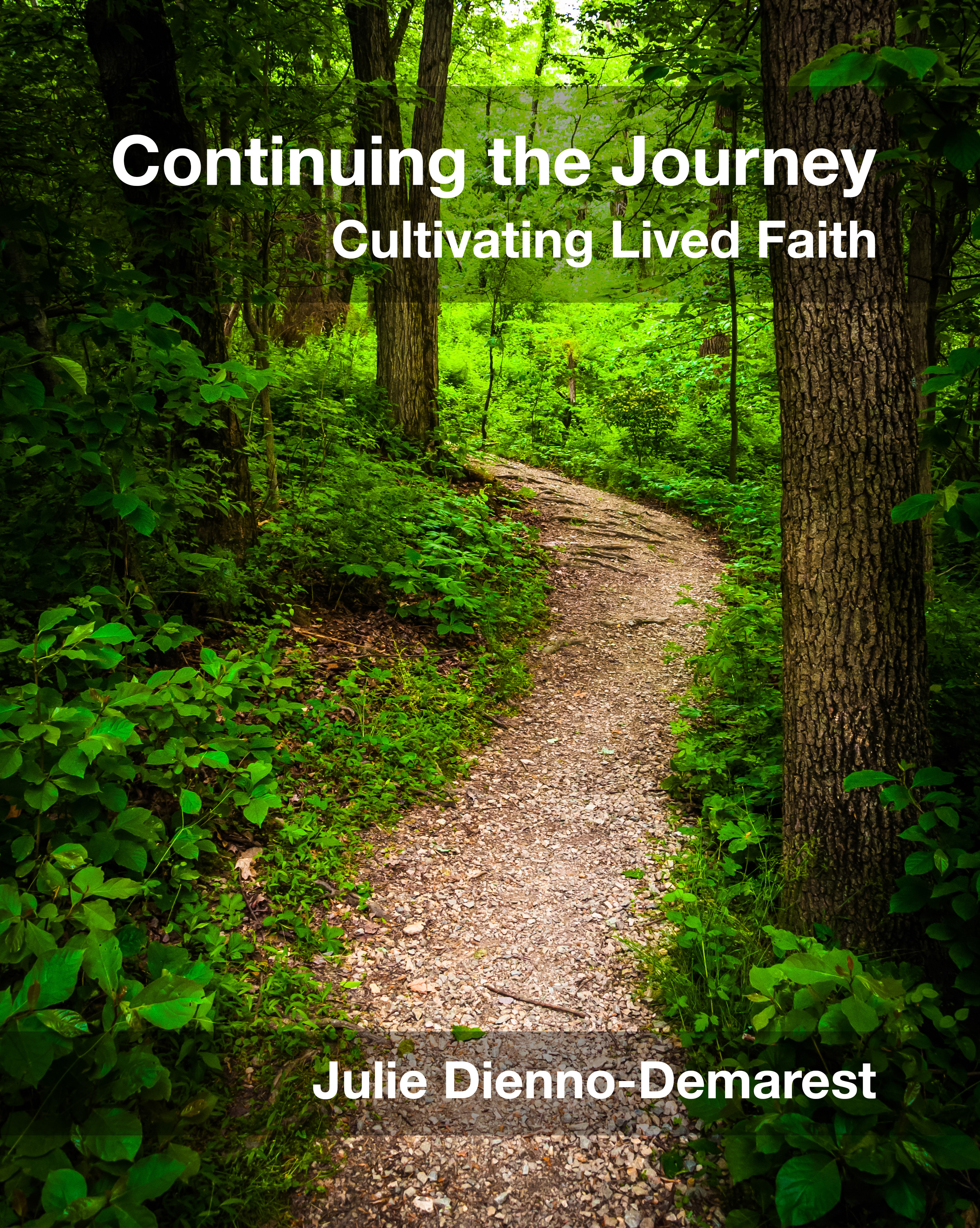